Over the last year, the DOE (Department of Energy) has scrambled to meet with the Biden-Harris administration’s goals to transition the United States to a focus on clean energy. Naturally, big goals require big renovations and adaptations.

Last year, the DOE invested $2.5 billion in research, development, and deployment of clean energy technologies between power, buildings, transportation, and industrial sectors. In addition, they announced a goal to reduce solar energy costs in half by 2020. For wind turbine technologies, additional achievements have been made by various companies within the industry.

One idea proposed for increasing wind turbine effectiveness in manufacturing. Michael Derby, the program manager of the U.S. DOE Wind Energy Technologies Office, suggests that taller land-based wind turbines will produce more power than shorter ones, as they have access to greater wind currents.

Taller wind turbines are naturally much more expensive than average wind turbines, as more materials are required, and transportation would become a lot more difficult. The proposed solution? Development of manufacturing methods for taller towers through on-site production methods. Keystone Tower Systems responded by adopting a spiral-welding technique from the steel-pipeline industry. Towers from Keystone can be up to twice as tall and constructed up to 10 times faster than standard towers. In addition, they can be constructed on site or at smaller factories than conventional turbines.

Alternatively, GE Renewables took a different approach. GE Renewables looked to 3D printing to solve the issues. In essence, they are looking to 3D print the concrete bases of towers used in wind turbines. Being able to 3D print the bases of towers on site will reduce the transportation costs of higher towers while creating additional employment opportunities at wind farms where this 3D printing technology will be used. 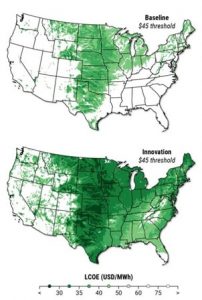 Keystone Tower Systems and GE Renewables are leading the pack to achieve the ambitious goals for clean energy through these two different methods. The figure above “shows the estimated expanded geographic area at a reference cost of $45/megawatt-hour for tall towers (up to 160 meters), considering projected costs in 2030.”